who killed benson the carp?

Joined Apr 14, 2009
·
3,355 Posts
By ALISTAIR MACDONALD and PAUL SONNE
TANSOR, England -- In the land of Sherlock Holmes and Agatha Christie, it has fallen to a taxidermist to uncover whether foul play is to blame for the corpse found floating in a lake here late last month: Benson, the legendary 52-pound carp whose untimely death has captivated a nation's anglers.

For years, Benson was a catch-and-release attraction in Bluebell Lakes, a private fishing complex. Benson was a normal-size carp when she was placed in Kingfisher Lake 16 years ago. The lakes' owner, Tony Bridgefoot, noticed Benson's propensity to pack on the pounds and groomed her for stardom. For years, Mr. Bridgefoot was able to claim that Benson was the U.K.'s largest common carp, her appeal bolstered by bright-orange scales that seemed painted on and perfect lips.

Fishermen in Tansor, England, are mourning the passing of a legendary 64-pound carp, named Benson, known to roam the waters of Bluebell Lakes. But the cause of death remains a mystery. WSJ's Paul Sonne reports.

The result was a plus-size phenomenon. Fishermen from as far afield as Germany trekked to this lake hoping to hook a fish the size of a family dog. Benson was caught and put back in the lake 63 times, hitting a high weight of 64 pounds two years ago.

But at 2 p.m. on July 28, Mr. Bridgefoot, at his holiday home in Norfolk, took a disturbing call from his grandson, Jimmy: a large fish body had been found floating in one of his lakes.

"You'd better get back here, it looks like it's Benson," Mr. Bridgefoot remembers being told. Mr. Bridgefoot got in his car and drove home. Sure enough, Benson was sleeping with the fishes, so to speak. 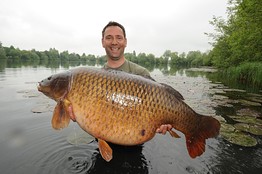 European Pressphoto Agency/Angling Times An angler posed with Benson the carp at Bluebell Lakes in May 2008.

Benson attracted attention across Britain for the sheer spectacle of her girth. Among fisherman, it was a more emotional issue.

"Within the fishing fraternity, she was like a film star, like Raquel Welch," said Dave Wilmot, a fisherman from Nottingham, standing on the shores of Kingfisher Lake in a pouring rain this week. "Like Sophia Loren," another angler piped in, and "equally difficult to catch."

But Benson's demise also set off an investigation to determine the cause of the 25-year-old's death.

Carp, it turns out, can live to 60, and when Mr. Bridgefoot found the traces of raw tiger nuts on the banks of Kingfisher Lake, and an empty bag nearby, he began to wonder whether his legendary fish had been poisoned by one of her pursuers. These nuts, a banned substance at Bluebell Lakes, are used to tempt fish to the surface, but they can prove toxic to a carp if they have been kept in moist conditions and not cooked.

"I had quite a rapport with the fish, and when she was caught, I used to talk to her, tell her to go make one more angler happy and look after herself in the meantime," Mr. Bridgefoot recalled on Thursday. Benson was also big business, and Bluebell Lakes was already suffering in the recession. Mr. Bridgefoot estimates around 40% of Bluebell Lakes' anglers came to try to catch the leviathan fish.

CSI Benson
Some scenarios on what killed Benson -- and how.

Who dunnit: A renegade angler What dunnit: Tiger nuts. Moist conditions can breed a toxic mold, which can be poisonous. But Professor Simon Davies, fish nutrition expert at the University of Plymouth, says uncooked or not, the nuts would have to have been in moist conditions and it would likely take a lot to kill Benson. Who dunnit: The very angling community that so loved Benson What dunnit: Stress. Benson was taken out of the water 63 times and photographed. Experts are still unsure whether fish feel pain, most conclude they feel stress. Who dunnit: Anglers again What dunnit: Poor diet. Carp food should have fatty oil content of 8%, Tiger Nut bait has up to 28% and other treats have more, according to Professor Davies. A fish's heart muscle may not have been able to keep up with such gluttonous food. Who dunnit: Benson's boyfriend What dunnit: Pregnancy. Fish eggs can cause blockages. Who dunnit: Benson's body clock. What dunnit: Old age. While some carp live to the age of 60, a 24-year-old carp can be the equivalent of a 50-year-old human according to Dr. Peter Burgess, an expert in fish health at the University of Plymouth Word of Benson's demise spread quickly among her pursuers. At 6 p.m. Tuesday, James Piggott received a text message from a friend: "I've got some bad news for you -- Benson is dead." It took three more calls from friends to convince Mr. Piggott it was true. For eight years, he fished alternate weekends -- plus weeks of vacations -- in an unsuccessful bid to catch Benson. Just weeks ago, Mr. Piggott was tantalizingly close, friends say, but Benson broke free and now she will never be his.

"They should be banned from fishing," he said.

But who plays coroner to a carp? That afternoon, Barry Williams, a taxidermist with some zoology training, was mounting a red stag head when he took a call from Mr. Bridgefoot.

Mr. Bridgefoot first encountered Mr. Williams years ago and the two bonded when Mr. Bridgefoot took a stuffed alligator off the taxidermist's hands after a client had refused to pay for it.

Now, Mr. Bridgefoot had two jobs for Mr. Williams: Find out what killed the fish he described as like "a handcrafted sculpture" -- and stuff Benson so she could be mounted on the wall of Mr. Bridgefoot's fishing lodge.

Benson's corpse currently sits in a freezer at Mr. Bridgefoot's house, where it will stay till Mr. Williams drives down on Friday to pick it up. By Sunday morning, with Benson thawed, photographed and measured, Mr. Williams expects to get to work.

Peter Burgess, an expert in fish health at the University of Plymouth, England, wonders whether a taxidermist can solve the case, likening it to sending a dead relative to a butcher to determine the cause of death. He says that clues are vanishing by the hour, because freezing the fish damages the tissue.

Dr. Burgess, a veteran of "countless" fish autopsies, has all but ruled out some typical fish-death suspects such as low oxygen levels in the lake or infections; no other corpses were found with Benson.

The lack of other carcasses has also led Dr. Burgess, and others, to question the toxic-nut theory. This, too, would have likely claimed other victims.

More Animals in the Journal
Mr. Bridgefoot disagrees. Benson "was a very greedy girl" and may have eaten the entire feed, he says.

On examining a photo of Benson, Dr. Burgess thinks he may have one clue: her large gut. A healthy carp should be a lot more streamlined, but carp in fishing lakes often suffer from poor fatty diets due to baits, like cooked tiger nuts, that anglers use to tempt them.

The culprit then may not be one angler, but all of them. Likewise, the stress Benson suffered from anglers plucking her out of the water 63 times may have finally caught up with her, a potential cause even Mr. Bridgefoot acknowledges.

Benson's diet is a factor that Mr. Williams, who first started taxidermy at age 14 by mounting a rat, has already earmarked to examine. Fatty deposits on the liver would point to that, he says. Other signs he will look for include a "badly discolored digestive tract," which would suggest poisoning.

Mr. Williams doesn't want to preempt his investigation but says he believes the likely cause was complications due to pregnancy. Over the years, he has had more than 10 carp on his table, and in most cases the cause of death was eggs blocking up the uterus and causing infections.

"By Sunday afternoon I'll have a good idea of what went wrong" for Benson, says Mr. Williams.

On the banks of Kingfisher Lake, fishermen reminisced by the spot where Benson's lifeless body was reeled in for the final time.

Ray Armstrong, a fisherman from Birmingham, spent seven years trying to catch Benson and finally succeeded at 2 a.m. a year and a half ago. "It was like winning the lottery...a magical night," he said.

This is an older thread, you may not receive a response, and could be reviving an old thread. Please consider creating a new thread.